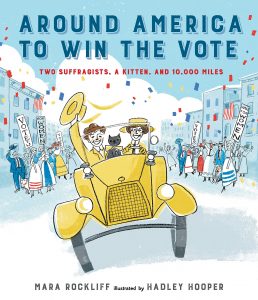 Around America to Win the Vote: Two Suffragists, a Kitten, and 10,000 Miles by Mara Rockliff

Description: In April 1916, Nell Richardson and Alice Burke set out from New York City in a little yellow car, embarking on a bumpy, muddy, unmapped journey ten thousand miles long. They took with them a teeny typewriter, a tiny sewing machine, a wee black kitten, and a message for Americans all across the country: Votes for Women! The women’s suffrage movement was in full swing, and Nell and Alice would not let anything keep them from spreading the word about equal voting rights for women. Braving blizzards, deserts, and naysayers–not to mention a whole lot of tires stuck in the mud–the two courageous friends made their way through the cities and towns of America to further their cause. One hundred years after Nell and Alice set off on their trip, Mara Rockliff revives their spirit in a lively and whimsical picture book, with exuberant illustrations by Hadley Hooper bringing their inspiring historical trek to life.

Born to Fly: the First Women’s Air Race Across America by Steve Sheinkin

Description: The 1929 Air Derby was the first women’s air race across the U.S. Meet the trailblazers: Amelia Earhart, who has captivated generations; Marvel Crosson, who built a plane before she even learned how to fly; Louise Thaden, who shattered jaw-dropping altitude records; and Elinor Smith, who at age seventeen made headlines when she flew under the Brooklyn Bridge. The Derby was a suspenseful, nail-biting race across the country, and Sheinkin brings to life the glory and grit of the dangerous and thrilling early days of flying.

Finish the Fight!: The Brave and Revolutionary Women who Fought for the Right to Vote by the Staff of The New York Times

Description: Who was at the forefront of women’s right to vote? We know a few famous names, like Susan B. Anthony and Elizabeth Cady Stanton, but what about so many others from diverse backgrounds–black, Asian, Latinx, Native American, and more–who helped lead the fight for suffrage? On the hundredth anniversary of the historic win for women’s rights, it’s time to celebrate the names and stories of the women whose stories have yet to be told.

Description: Story of Ida B. Wells, one of the great, yet one of the least known, civil rights leaders. A promised journalist, she is remembered for her leadership in women’s voting rights, the NAACP, and anti-lynching.

A Kids’ Guide to America’s First Ladies by Kathleen Krull

She Persisted: 13 American Women Who Changed the World by Chelsea Clinton

Description: Chelsea Clinton introduces tiny feminists, mini activists and little kids who are ready to take on the world to thirteen inspirational women who never took no for an answer, and who always, inevitably and without fail, persisted. Throughout American history, there have always been women who have spoken out for what’s right, even when they have to fight to be heard. In early 2017, Senator Elizabeth Warren’s refusal to be silenced in the Senate inspired a spontaneous celebration of women who persevered in the face of adversity. In this book, Chelsea Clinton celebrates thirteen American women who helped shape our country through their tenacity, sometimes through speaking out, sometimes by staying seated, sometimes by captivating an audience.

Wheels of Change: How Women Rode the Bicycle to Freedom (with a Few Flat Tires Along the Way) by Sue Macy

Description: Explore the role the bicycle played in the women’s liberation movement.

Who Says Women Can’t be Doctors?: The Story of Elizabeth Blackwell by Tanya Lee Stone

Description: An introduction to the life and achievements of Elizabeth Blackwell, the first American female doctor. Describes the limited career prospects available to women in the early nineteenth-century, the opposition Blackwell faced while pursuing a medical education, and her pioneering medical career that opened doors for future generations of women.

Fashion Rebels: Style Icons who Changed the World through Fashion by Carlyn Cerniglia

Description: Get to know the women who’ve wielded the power of fashion and brought about change with this illustrated biography that features twenty-five of history’s most influential fashion icons.

History vs Women: The Defiant Lives that They Don’t Want You to Know by Anita Sarkeesian & Ebony Adams

Description: Looking through the ages and across the globe, [the authors] have reclaimed the stories of twenty-five remarkable women who dared to defy history and change the world around them. From Mongolian wrestlers to Chinese pirates, Native American ballerinas to Egyptian scientists, Japanese novelists to British Prime Ministers, [this book] will reframe the history that you thought you knew.

What Every Girl Should Know: Margaret Sanger’s Journey: A Novel by J. Albert Mann

Description: Struggling to find her way amidst the harsh realities of poverty, Margaret didn’t want to become either a teacher or a mother– which seemed to be a woman’s only options. Feisty and opinionated, Margaret Higgins Sanger witnessed and experienced incredible hardships, which led to her groundbreaking work as an advocate for women’s rights and the founder of Planned Parenthood.

Women in Science: 50 Fearless Pioneers who Changed the World by Rachel Ignotofsky

Description: A collection of artworks inspired by the lives and achievements of fifty famous women in science, technology, engineering, and mathematics, from the ancient world to the present, profiles each notable individual.

Description: A vibrant and empowering history that emphasizes the perspectives and stories of African American women to show how they are–and have always been–instrumental in shaping our country. In centering Black women’s stories, two award-winning historians seek both to empower African American women and to show their allies that Black women’s unique ability to make their own communities while combating centuries of oppression is an essential component in our continued resistance to systemic racism and sexism.

Description: Jenkins brings together a wide selection of cultural objects representing the milestones and legacy of the long fight for women’s voting rights. Color photos and essays detailing each object’s story placed readers in the action of a groundbreaking movement and transports them to the sites that are the keepers of our country’s past.

Description: Monson shares the stories of twelve women who heard the call to settle the west and came from all points of the globe to begin their journey. As a slave, Clara watched helpless as her husband and children were sold, only to be reunited with her youngest daughter six decades later. Charlotte hid her gender to escape a life of poverty and became the greatest stagecoach driver that ever lived. A Native American, Gertrude fought to give her people a voice and to educate leaders about the ways and importance of America’s native people. All endured hardships, overcame obstacles, and changed the world. 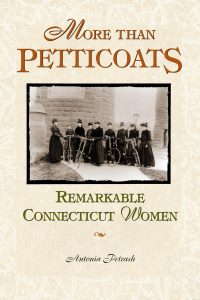 Description: Despite being the third smallest state, Connecticut can claim more than its share of remarkable women who have made lasting social, political, and cultural contributions to both their own state and to their nation. From Prudence Crandall, Connecticut’s official State Heroine, who braved imprisonment for opening a school for black girls, to Harriet Beecher Stowe, whose classic Uncle Tom’s Cabin urged the nation on a path towards abolition of slavery, to Margaret Fogarty Rudkin, who changed the nation’s eating habits with her healthful bread made at Pepperidge Farm, Connecticut women have broken the rules to make their own and in the process improved their world, and ultimately ours, forever. 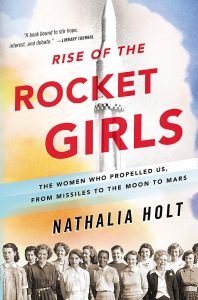 Rise of the Rocket Girls: The Women who Propelled Us, From Missiles to the Moon to Mars by Nathalia Holt

Description: During World War II, when the newly minted Jet Propulsion Laboratory needed quick-thinking mathematicians to calculate jet velocities and plot missile trajectories, they recruited an elite group of young women–known as human computers–who, with only pencil, paper, and mathematical prowess, transformed rocket design and helped bring about America’s first ballistic missiles. But they were never interested in developing weapons–their hearts lay in the dream of space exploration. So when JPL became part of a new agency called NASA, the computers worked on the first probes to the moon, Venus, Mars, and beyond. Later, as digital computers largely replaced human ones, JPL was unique in training and retaining its brilliant pool of women. They became the first computer programmers and engineers, and through their efforts, we launched the ships that showed us the contours of our solar system. For the first time, Rise of the Rocket Girls tells the stories of these women who charted a course not only for the future of space exploration but also for the prospects of female scientists.

Sisters in Law: How Sandra Day O’Connor and Ruth Bader Ginsburg Went to the Supreme Court and Changed the World by Linda Hirshman

Description: An account of the intertwined lives of the first two women to be appointed to the Supreme Court examines their respective religious and political beliefs while sharing insights into how they have influenced interpretations of the Constitution to promote equal rights for women.

Vanguard: How Black Women Broke Barriers, Won the Vote, and Insisted on Equality for All by Martha S. Jones

Description: According to conventional wisdom, American women’s campaign for the vote began with the Seneca Falls convention of 1848 and ended with the ratification of the Nineteenth Amendment in 1920. The movement was led by storied figures such as Elizabeth Cady Stanton and Susan B. Anthony. But this women’s movement was an overwhelmingly white one, and it secured the constitutional right to vote for white women, not for all women. In Vanguard, acclaimed historian Martha Jones offers a sweeping history of African American women’s political lives in America, recounting how they fought for, won, and used the right to the ballot and how they fought against both racism and sexism. From 1830s Boston to the passage of the Voting Rights Act in 1965 and beyond to Shirley Chisholm, Stacey Abrams, and Kamala Harris, Jones excavates the lives and work of Black women who, although in many cases suffragists, were never single-issue activists.